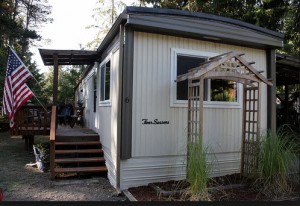 An early weekend morning in south Georgia, and Joe was returning home from hunting.  As he approached his family’s trailer he was almost to the door when he heard one gunshot followed by a second.

He opened the door stepped into the room and saw his mother and father lying on the floor, with a now oozing pool of blood around each one of them.  Joe remembered them making gurgling sounds, some call it the “death rattle.”  He looked quickly around the room and noticed that blood was splattered throughout and as he told the story to me, “half their brains was on the wall.”

Joe lived with different relatives for several years after that and at seventeen years of age, after graduating from high school found himself living under a bridge in a small south Georgia town.  A friend found out about Joe being homeless with no family to speak of, drove to south Georgia and brought Joe back to live with their family in a rural outlying area south of Atlanta, Georgia.

After listening to Joe tell me his story, I could not respond.  What would I say, even if I tried.

From that day, whenever I would hear or read of someone who had grown up in a difficult situation, in my mind I immediately compared them to Joe.

A few month’s later I was talking with him late at night on the phone.  He asked me a haunting question.  He asked, “John, why me?  Why would God put this on me?  Everyday I live with this.”

I hesitated for a moment and replied, “Joe, because God trusts you.  It’s not your fault.  Your father made a decision that affected your life for as long as you will live.  However God entrusted you with that much pain.”  I told him of Mary Beth Chapman in her book, Choosing To See, telling her son who had accidentally ran over his younger sister, she passing away from the injuries, that God could entrust him with that much pain.

I asked him how he does it each day.  He said, “Except for one day each year, I put my boots on, pick my head up and go on.  I will not let this defeat me.  I have to trust God has a plan for my life.”

Possibly God has entrusted you or someone you know with a tremendous amount of pain.  Scripture says, “God does not give us more than we can bear.”

I choose to believe the reason God created us with shoulders, regardless of how broad they are, is that our shoulders are intended to carry the weight of our pain as we also carry to others the tremendous Hope God has placed within each one of us.

That’s what Joe does.