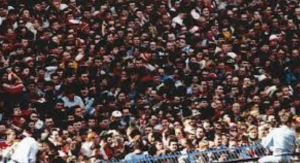 She had been bleeding for twelve long years with no relief and no physician of her time could heal her.

So something came alive in her and she decided she would find where Jesus was and if possible, would get to him.

And if she could get to Jesus, she would beg him to heal her.

So she decided today would be the day.

She heard where he was headed, on the way to the home of Jairus where his twelve year old daughter lay dying.

As Jesus tried to get through the crowds he was being hard pressed to move.

She knew this would not be easy.

She fell to the ground and began to crawl through the crowd as they pushed and shoved.

Somehow she made her way through and when she touched him she was immediatlely healed.

And Jesus turned to see who touched him even in such a large crowd how would he know who it was.

Yet he was was able to identify who it was and how it had come to be that she touched him.

Just a thought this evening.

What keeps each one of us from fighting through the crowd to touch him?

We see him, we know what he can do, yet we don’t fight through.

I sent a text yesterday to someone and told them they had the same type of determination as this lady.

To fight through the crowd until she got to Jesus.

Don’t let your circumstances keep you from getting to Jesus.

You have to have an almost animalistic hunger to find him and to get to him.

List the things that keeps you from crawling through the crowd to get to the hem of his garment.

Fight through the crowd.